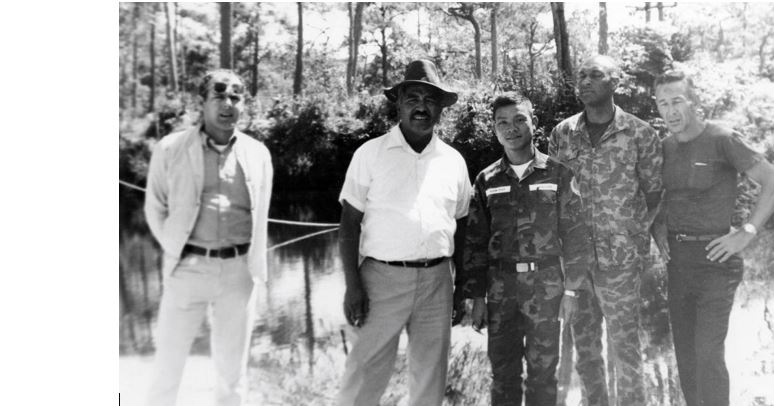 Placing intelligence officers into nice, neat categories with clear organizational boundaries is sometimes difficult and can be misleading. The affiliations of men like Sam Kail, David Morales and Hal Feeney are clear cut and easily provable. But other players have more tenuous, murky ties to various agencies and are not easily defined. Some may have worked for different agencies at different times or perhaps worked for one agency while being assigned to another for a specific period or project. There are many possibilities and some of the organizational references below are fluid and speculative. Five examples follow.

There was a man deeply involved in the assassination calling himself Colonel William Bishop and claiming to be U.S. Army intelligence. He was well known to David Morales, Felipe Vidal Santiago and Roy Hargraves. But searches of official records have so far turned up very little on Bishop and photographs of him are hard to come by. Was he really a colonel in Army Intelligence? Was William C Bishop his real name or a pseudonym? Was this the same man interviewed by author Dick Russell decades later?

John Adrian O’Hare was officially a member of the United States Air Force. For several years he was assigned to a U.S. Army special forces unit in Tampa, Florida. But according to some who knew him, he was working for CIA.

Edward Ivan Arthur has a long and distinguished history of service to the U.S. Army. In the early 1960’s he traveled to south Florida, ostensibly of his own accord as an “adventurer”, to join the fight against Fidel Castro. He became involved with Jerry Buchanan and Commandos L, which was led by Tony Cuesta and Ramon Font and counted Herminio Diaz Garcia among its members. Though no official record of Ed working for CIA has been located, more than one person who would have been in a position to know believes that to be the case. Was he an Agency employee? An asset of some kind? Was he fully aware for whom he was working?

Ed Lansdale was a U.S. Army intelligence officer in 1945 and was transferred to the Air Force in 1947, rising to the rank of Major General. From 1657 to 1963, he was DOD’s Deputy Assistant Secretary for Special Operations and Assistant Secretary of Defense for Special Operations in Washington, D.C., working closely with high-level military officers and CIA. Lansdale officially retired from the Air Force three weeks before the assassination, on November 1, 1963.

Gordon McLendon was closely associated with Jack Ruby and CIA’s David Atlee Phillips. He even helped Phillips create the Association of Former Intelligence Officers in 1975. But he had not officially worked as a Naval intelligence officer since the 1940’s.

The categorizations below are the author’s attempt to identify with which agency the person was most closely associated in late 1963.